Shepherd on a Walkabout

Princess in the Missy Trap just moments after being safely captured

Princess, a young German Shepherd, took flight from her home during the commotion of a medical emergency for her owner.  During the loud noise and open doors of the emergency responders, Princess bolted through one of the open doors.  She was seen numerous times over the course of the next three weeks and each time she seemed to settle into an area, another event would drive her away.

A friend of the owner reached out to The Retrievers to ask for help.  Angie had done many things right with flyering and awareness to the public, and it appeared that after a few days, Princess had settled into another area.  The area was rural with groves of trees, some newly planted cornfields and an interstate freeway within a 1/4-mile that had us all concerned. 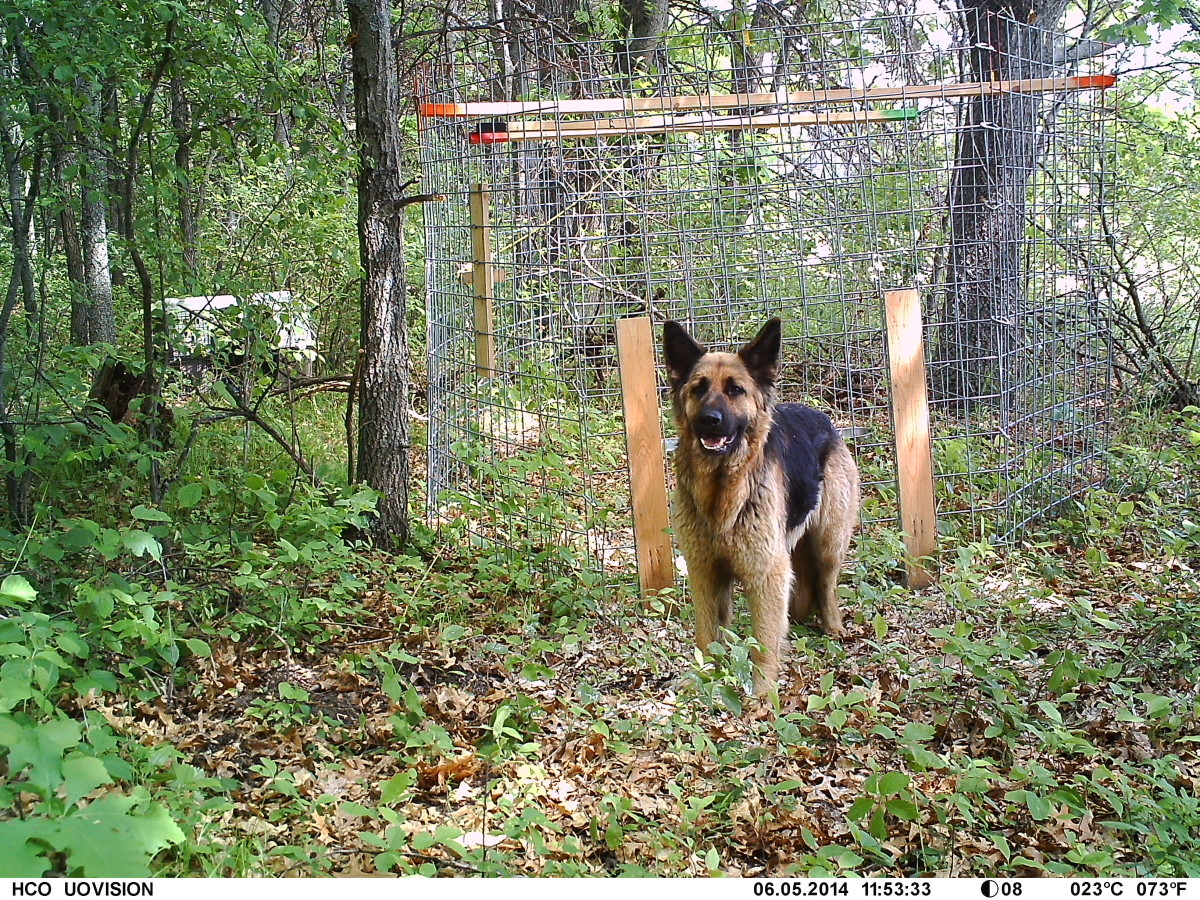 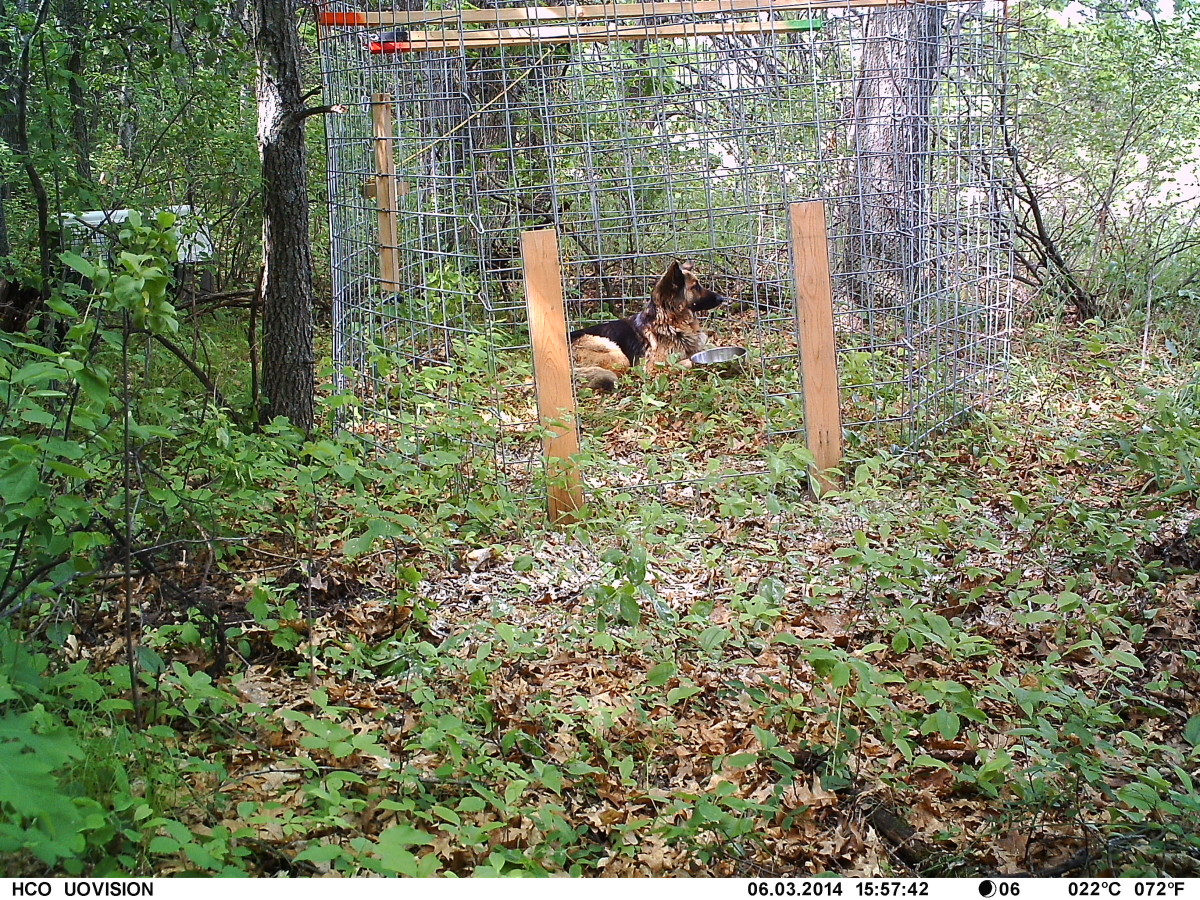 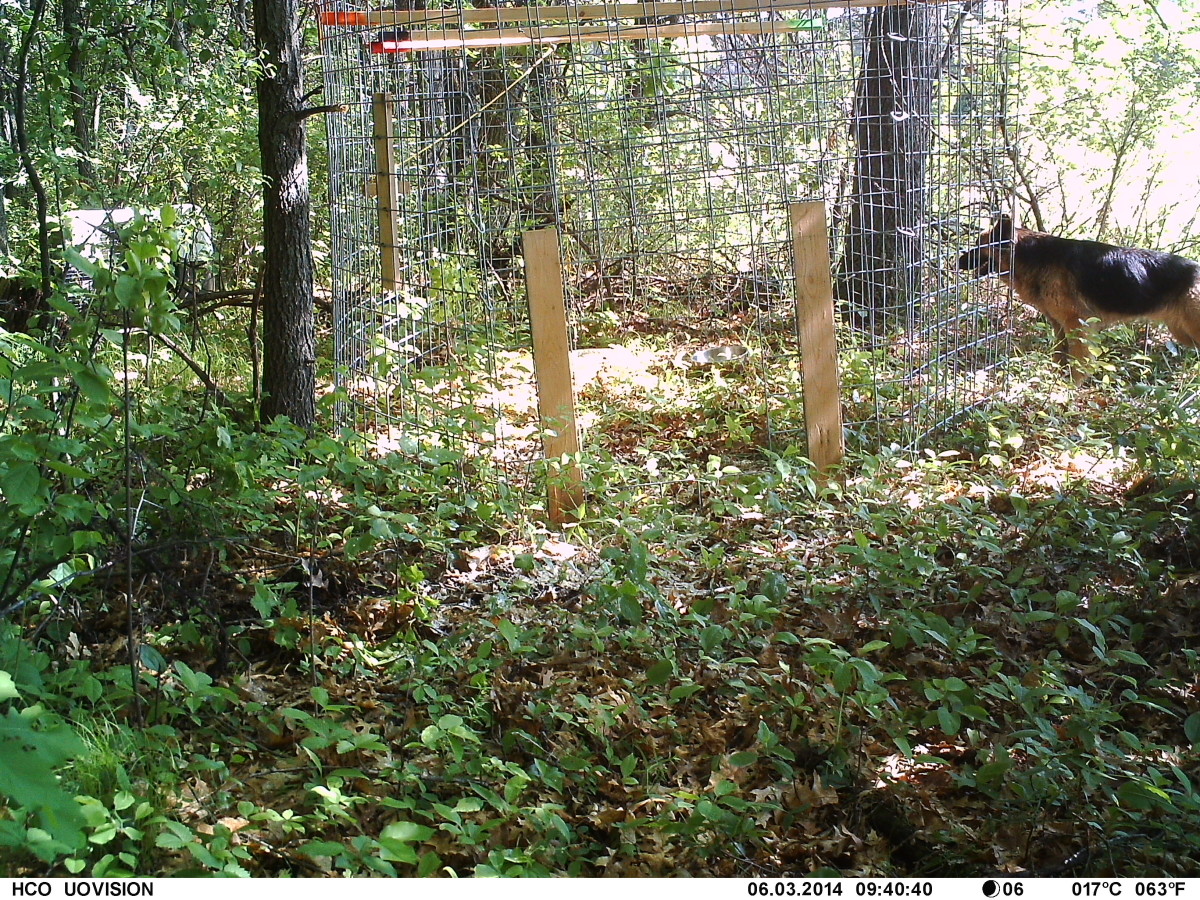 After waiting for approximately 90 minutes with no sign of Princess, and with a severe thunderstorm moving in, Greg decided to pitch his tent behind his jeep and get ready for the night.  It was during this moment that Greg heard the gate of the trap close.  Upon looking through binoculars, it was determined that either Princess or a black bear was in the trap eating food.  After approaching the trap, it was quickly determined that it was in fact Princess, who was now trying to ram her way out of the trap gate that was locked.

Princess quickly calmed down after getting some pieces of hot dog from Greg.   Angie was called and showed up on-site minutes later.   Princess was covered in ticks and had mosquitoes landing all over her face for a meal.  Greg and Angie were able to coax Princess directly into a crate from the trap.  Once inside, Princess and the crate were slid on the ground to Angie’s car where she was loaded and immediately taken to the vet for care.  She had lost significant weight and the ticks and mosquitoes were of concern.

Princess was, for the most part, given a clean bill of health.  She had some sores and was given some Heartworm tablets, but no other long term effects.  She was happily returned to her owner and we’re told was very excited to see her.   Princess could hardly wait to get out of the crate to be next to her owner.

Thanks to Angie for reaching out to us and doing everything you did to get Princess home.  It was another successful ending and Princess is safe again. 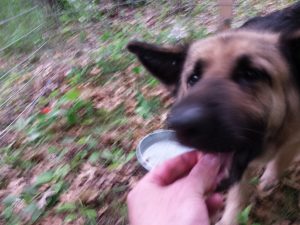 Greg in the trap with Princess and feeding her by hand 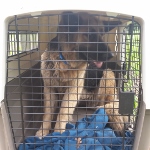 My first sight of Harry was when I started leaving the area that he had been sighted in after driving around with no sightings.

Suddenly there he was, sniffing around on the side of the road. When I slowly approached in my SUV, he turned and walked into the woods. I parked, grabbed some food and headed in his direction but instead of following him into the woods, I sat down on the side of the road and threw pieces of treats into the woods. He was not far from me – maybe 20 feet or so. With each throw I got him to come closer to me until he was eating from my hand. We continued for a while and each time he took a bite, I touched his neck, then his ear and then gave him short scratches.

Harry’s collar was much too big for him and I knew that if I grabbed it, he could easily slip out of it. I moved cautiously as I only had one chance. I was also consciously aware that Harry may not be friendly and could easily take a chunk out of my hand or arm and although I was equipped with a slip lead, he was aware of my every move and would run off the moment I pulled it out. I put as much food into my right hand as I could and offered it to him. Once he started eating, I grabbed his collar and tried to twist it with my hand entwined to tighten it…no luck. There I was, sitting on the side of the road with no more food to offer and a dirty green collar. Harry had retreated back to the woods.

I quickly got in my SUV and made a mad dash to the nearest grocery store. There were 9 very large breaded chicken tenders left at the deli so I bought them all. I also bought some highly aromatic bacon treats.

Back on site, I found Harry sitting in one of the out buildings on the property – cooling off in the shade and I started to feed him again. I made a trail from the end of the driveway to my SUV that was parked closer to the house and Harry followed. I tried to lure him into the back of my SUV but it didn’t work.

By then, the family had returned home and I briefed them on what I was trying to do. They were happy I was there and were more than happy to help on any way they could. The mom went inside and the 3 kids (ages 7-10), played outside. I started to move the food and water from one area of the yard to another where it would be better suited for a trap placement. As I walked from one area of the yard to the other, Harry followed me but kept about 5 feet of distance. I returned to my SUV to gather more food and when I turned around, Harry was gone.

I looked all around and then I saw him up by the house. He was receiving “pets” from the little girl, Olivia. The boys, Brandon & Johnny came over and all 3 started petting him. I watched from a short distance and then asked the kids to see if they could get him over to the grass. They started walking and Harry followed. I gave the kids a container of treats and asked them to keep petting him and keep his attention. I then slowly crawled up to Harry’s backside and gently placed the slip lead around his neck.

Harry was not even startled as he was soaking up all the love and attention the “young retrievers” were giving him.

While I was busy gaining Harry’s trust, a diligent Retrievers FB follower searched through the Lost Dogs-MN site to see if they could find a match with the picture I had posted when I first saw Harry. Come to find out, Harry had been missing from his family for almost 2 months. There were no words to describe the heartfelt reunion between Harry and his family when they arrived at the shelter to take him home. 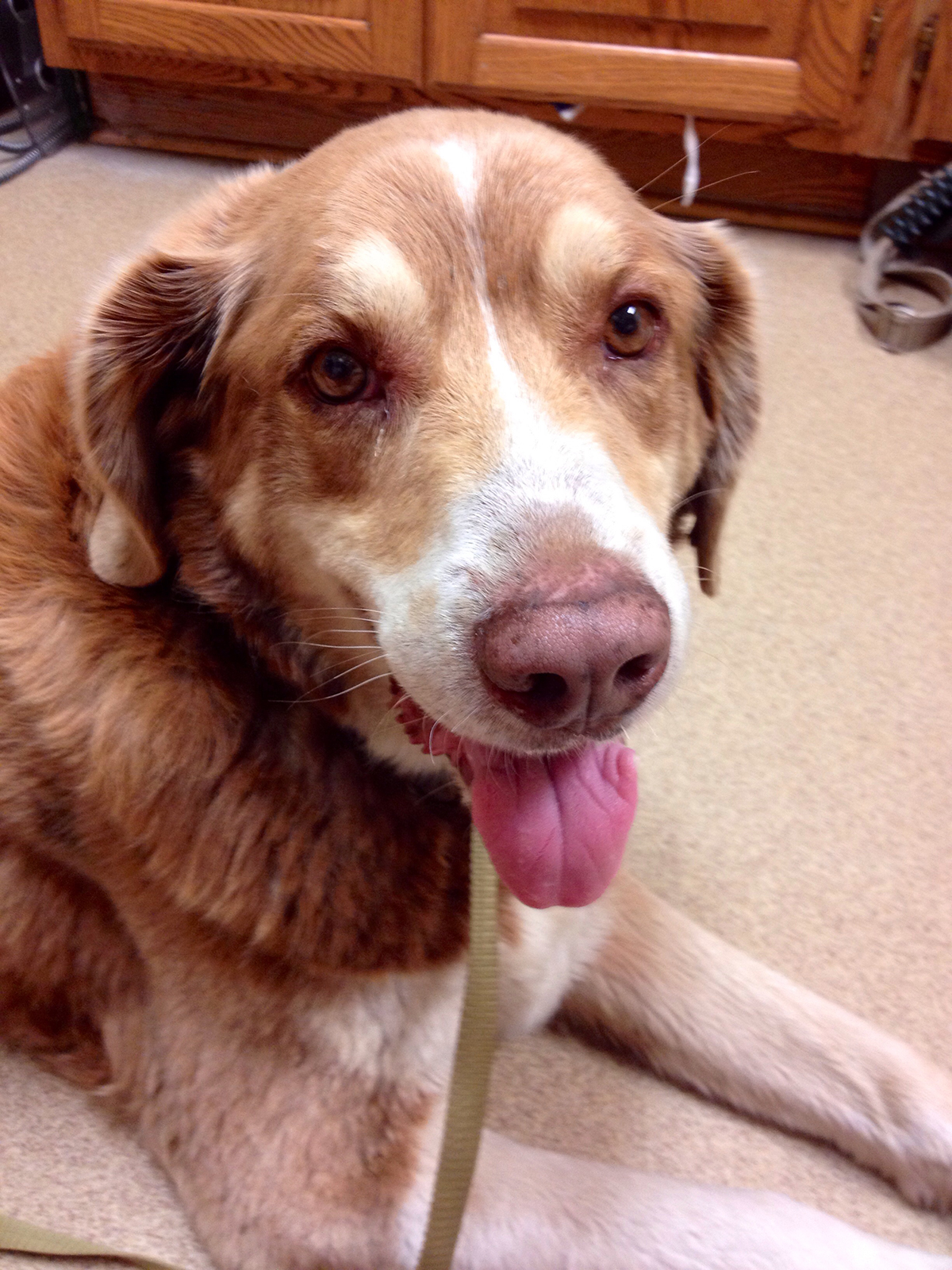 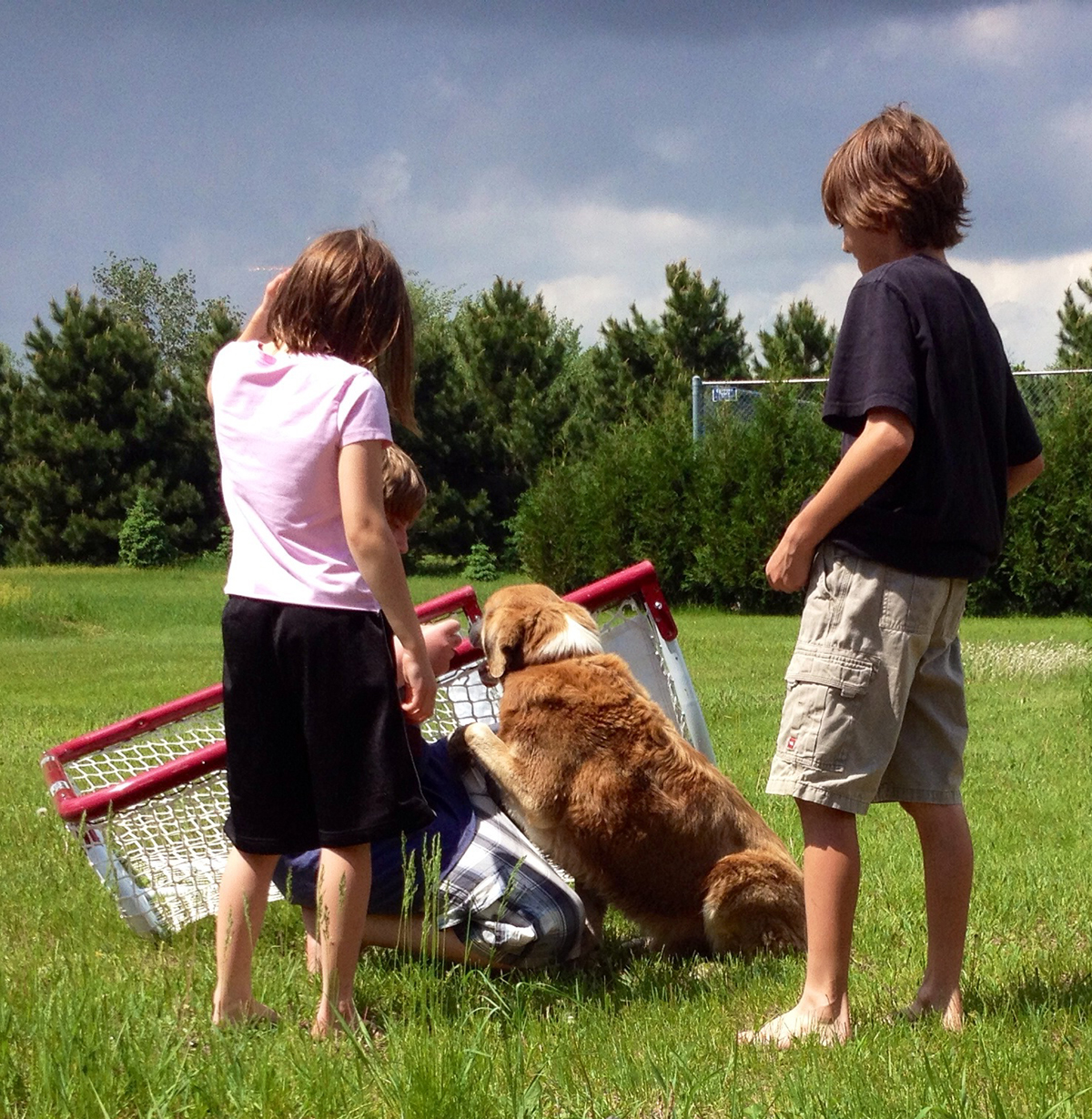 Harry and his buddies 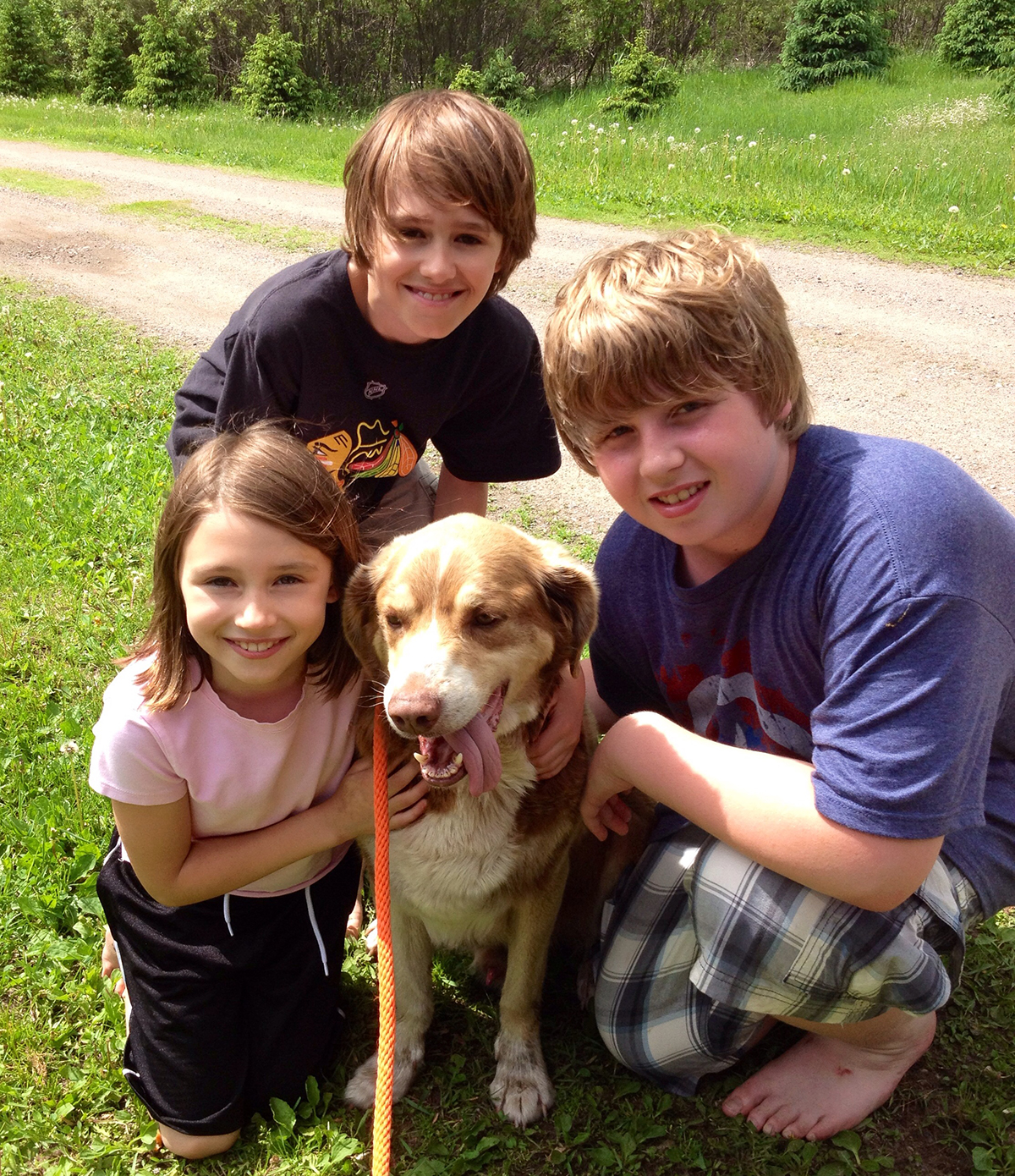 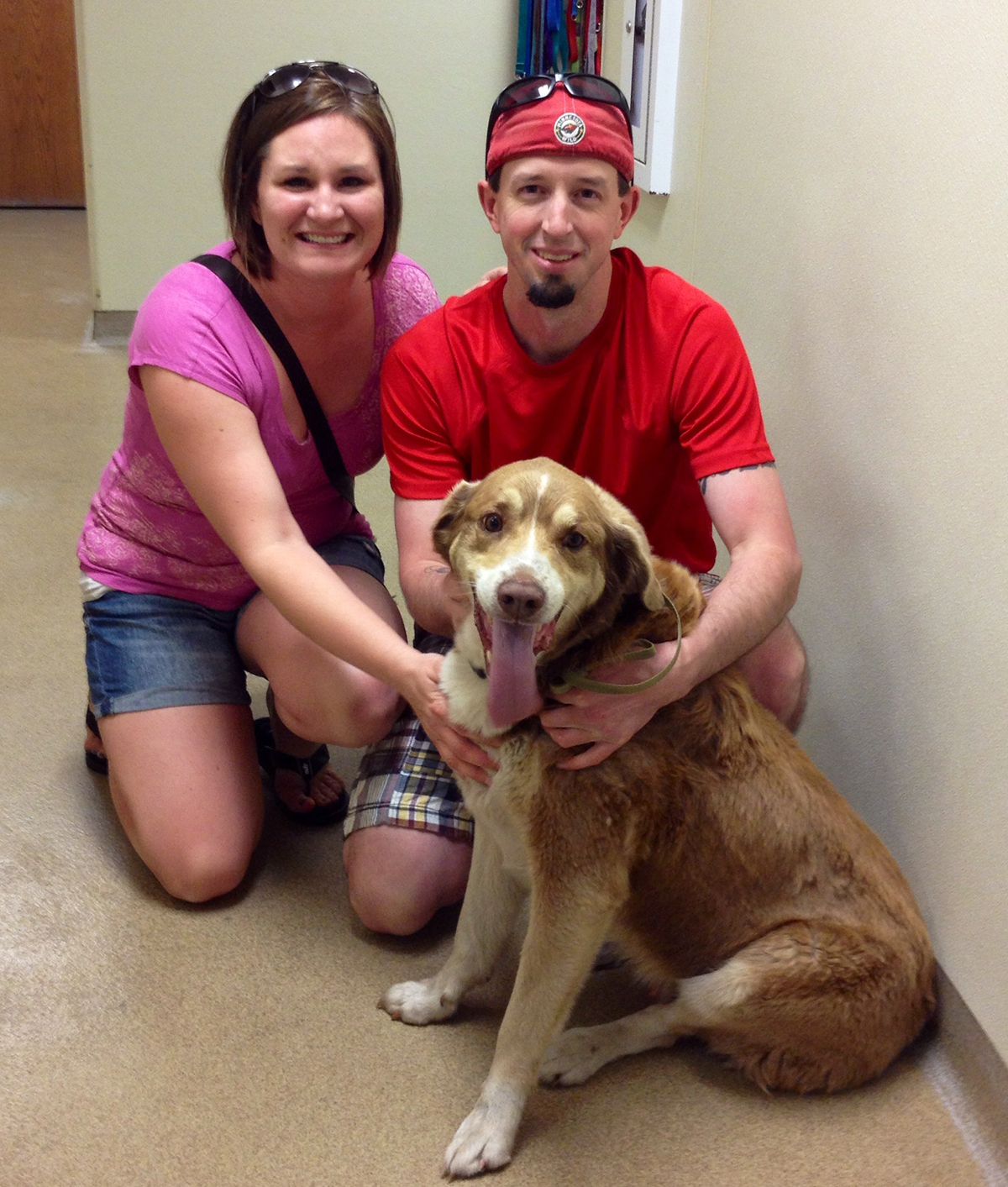