But some dogs are naturally shy, especially those who were not well socialized to humans as puppies. Dogs raised in puppy mills and hoarding situations are the most difficult to recover. They will bolt in panic when startled, or escape at the first opportunity when faced with a stressful situation. They may run for several miles before slowing down. And then, they will avoid human contact, running away from anyone who tries to approach.

However, even well-socialized dogs may instinctively go into “survival mode” after finding themselves separated from their owners for a period of time. While in this state of mind, dogs perceive all humans as threats. It’s not uncommon for a dog to flee even from his own family.

To recover a skittish dog, it’s often necessary to catch it in a live trap. There are many commercial models of box traps designed to catch animals without hurting them. They are typically the size of a dog crate and are triggered when the dog is lured far enough into the trap to step on a pressure plate, releasing a mechanism that causes the door to slam shut.

In our experience with lost dog searches, we’ve learned that many dogs will refuse to enter a box trap. Some will become so desperate that eventually hunger wins out over fear, and only then will they be captured. The downside of this, of course, is that the dog is loose and at risk—and hungry and scared and alone—longer than he needs to be.

In response to a search for Missy, a Golden Retriever who had repeatedly refused to enter a box trap, Retrievers founding member Greg James designed a much larger trap and built it from materials commonly available at hardware stores and farm supply retailers. Missy was caught the first night the trap was set. From that point on, our invention has been known as “the Missy Trap.”

The Missy trap is constructed of horse fence panels and assembled in the field with quick clips. When triggered, the gate drops and latches. The trap can be set to be triggered by the dog when pulling on a piece of bait, or manually by switching off an electromagnet from a distance. We have also developed the Raytripper, a device with a photoelectric sensor (similar to a garage door sensor) that drops the gate when a dog enters the trap and steps into the beam. The Raytripper was first used in the field with the capture of Rowan in Owen, Wisconsin.

Regardless of the trigger method used, we always monitor the trap with a motion-activated cellular video camera or trailcam. These technologies enable us to observe the dog’s behavior around the trap and know immediately when it has been captured.

The Missy Trap is modular by design, allowing us to configure it to the needs of a particular dog.  The trap can be sized up or down by using more or fewer side panels and can be configured into nonstandard shapes for special situations, such as wrapping the trap around a tree.

In addition to trapping lost dogs for their owners, we can also assist with catching skittish stray dogs, provided the following criteria are met: 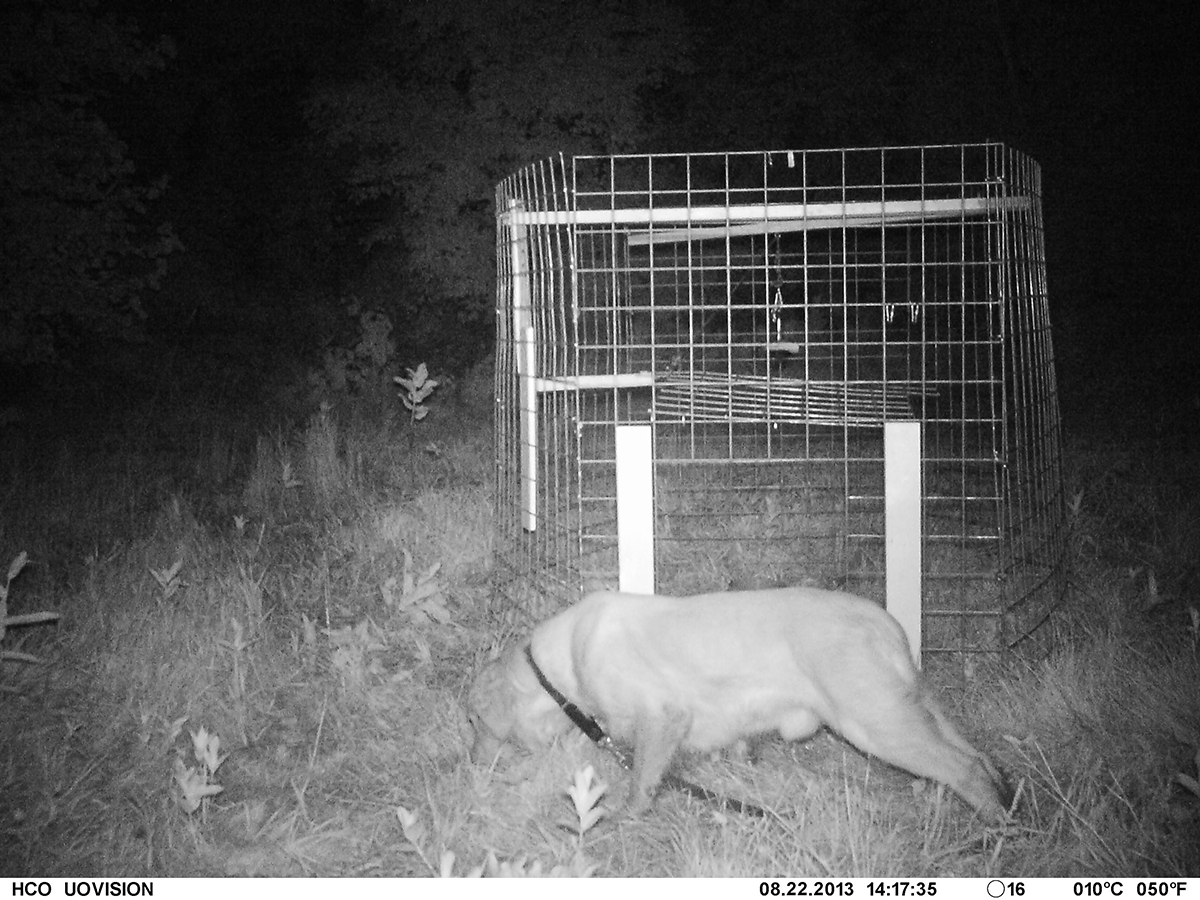 The trail camera’s infrared flash can capture an image even in total darkness. Here we see Larry, a former puppy mill dog, sniffing around the entrance to the trap. His tense, stretched-out body posture tells us he’s very wary of it.