The Retrievers were first contacted by one of our Facebook fans about a dog, wondering if we could help.  Molly the Mastiff had been vacationing in Northern MN with her family at a cabin and had gotten loose from her tie out.  She was a former puppy mill girl who was skittish and was hesitant to approach anyone.  Per our request, Molly’s owners contacted us directly and we agreed to do our best to help her and them.  Bobbi Jo from our team lives near the area and became the case manager.

Molly’s owners who lived 4 hours away in the Twin Cities returned the following weekend to assist in getting awareness in the area.  This was very important because soon after flyers were distributed to residents in the area of the point of flight and signs posted, the calls started coming in.  Many had seen Molly and she appeared to be remaining in the area of the resort and golf course she took flight from.  During the distribution of flyers to the area, Bobbi Jo (BJ) met a wonderful couple named Kathy and Tom, who lived nearby.  They offered to help however they could in the mission to bring Molly home.

Based on reported sightings, BJ and Kathy set up a feeding/water station and a Missy Trap in a secluded area nearby.  It was their hope that Missy would catch scent of the food and grow accustom to feeding there.  BJ also set up a trail camera to confirm that it was Molly that would be visiting and eating from the feeding station.  The Trap was set up, but the gate was locked open.  This would allow Molly to gain comfort in entering and leaving the trap at will for food and water, so when the time came to catch her, she would not hesitate to go into the trap.

BJ and Kathy diligently kept the food and water stocked and after two nights, they finally had a sign. 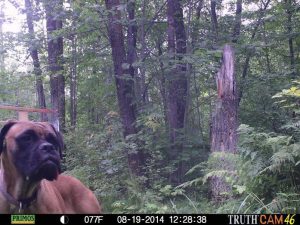 A picture of Molly standing right in front of the camera.  She had found the food and trap.  For the next few days and nights Molly visited at all hours and would often linger around for up to 90 minutes.  Her owner’s clothing with their scent was hanging on the trap and Molly’s blanket was also in the trap.  We feel she felt comfort in the scents and that is why she lingered for long periods.  The time was right for capture.

That Friday I drove up from the Twin Cities.  I brought our Sensor/Magnet set up and our deep cell marine battery.  The location of the trap was in the remote forested area and the battery could be used to power the sensor/magnet if a vehicle to power them was not available.

We set up the sensor/magnet/battery and armed the trap ready for capture.  We also set up our two Cellular Trail Cameras.  If we did not capture Molly in the daylight hours, there was no way we would see if she was near the trap because it was pitch black with zero light out there after dark.  We set up camera 1 about 40-50 feet from the trap, on the trail she had been using to get to the trap.  A picture sent from this camera would alert us that she was on her way and approaching the trap.  The other Cellular camera was aimed right at the trap so we could watch her in almost real time while she lingered around the trap.  We also had two regular trail cameras set up near the trap just to capture as many photos of the capture as we could.

We waited for a few hours.  Some rain showers hit us off and on and there was no sign of Molly before it got dark.  At that point we were blind and relying on the cameras and listening for the noise of the gate to close….

At approximately 9:45pm, Camera 1 sent us a photo.  It was Molly and she was approaching the trap! 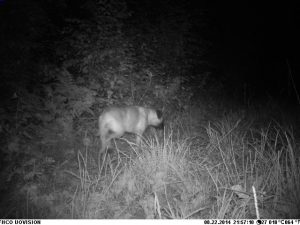 Molly on Camera 1 Approaching the Trap

Shortly there after, Camera 2 starting sending photos and we could see the red lights of one of the regular cameras turning on and off.  Molly was at the trap and was lingering and taking her time to go in.  BJ, Kathy and I were sitting in my jeep about 50 feet from the trap and we suspect she saw my jeep and was weary of the new element near the trap.

As we sat on pins and needles in the jeep whispering and waiting, at 10:30 we heard it.  The gate had closed!  I turned on the headlights and Molly was captured in the trap!

We calmly approached the trap and she was anxiously trying to find a way out.  There wasn’t one.  After a few moments, she calmed down and I got in the trap with her.  She shut down and seemed to take comfort in the pets she was getting from all of us.  At this point, it was obvious she was relieved and knew we meant her no harm.  We put a martingale collar on her and used a leash and a slip lead to move her into my jeep for transport back to the Twin Cities and home.   It was now midnight by the time I hit the road for the 3 1/2 hour drive.  Shortly after we got on the highway, I heard a loud sigh of relief come from Molly.  She slept the whole way home… 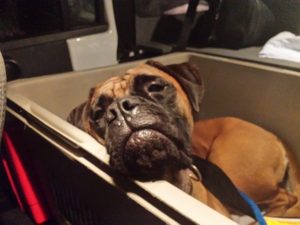 Molly stayed with me until the following afternoon when she was reunited with her dad.  Molly the Mastiff is now safely back home with her loving family.

Once again, Bobbi Jo as the Case Manager for Molly executed a plan perfectly.  Her guidance and the overwhelming support and help from Kathy and Tom made Molly’s safe capture possible.  They worked the plan and the plan worked for them and Molly…

Welcome home and be safe Molly… 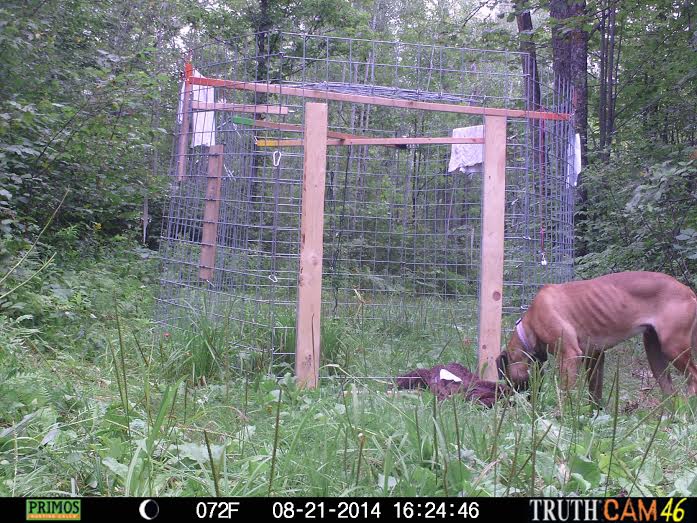 Molly Pulling Her Blanket Out of The Trap 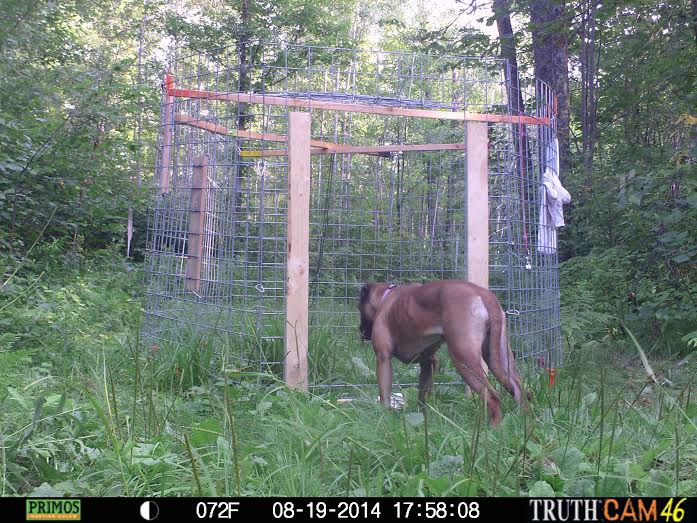 Molly Near The Trap 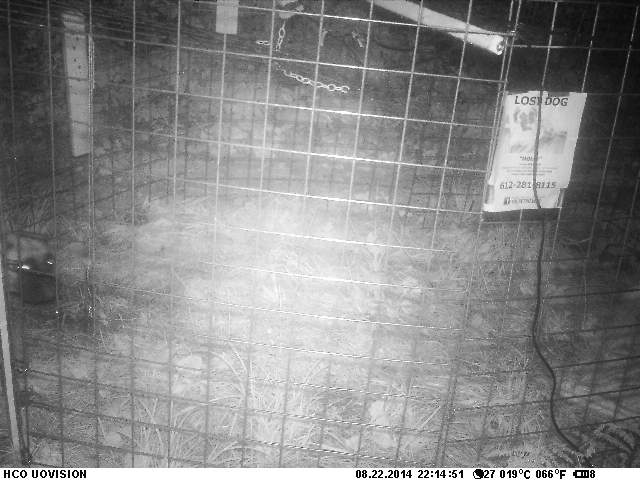 Molly Poking Her Head In The Trap 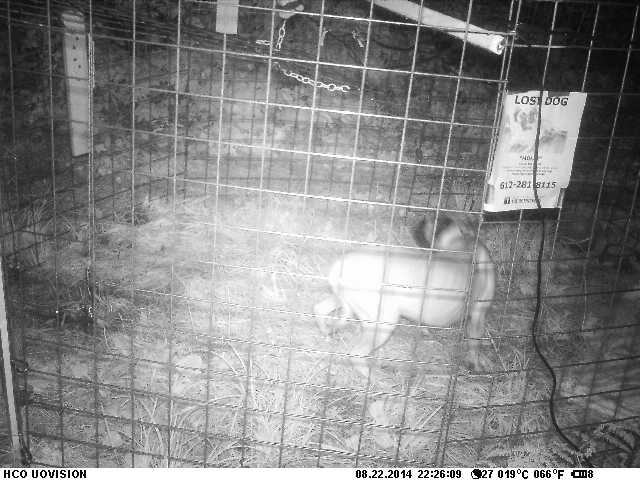 Molly In Trap Before Gate Closed 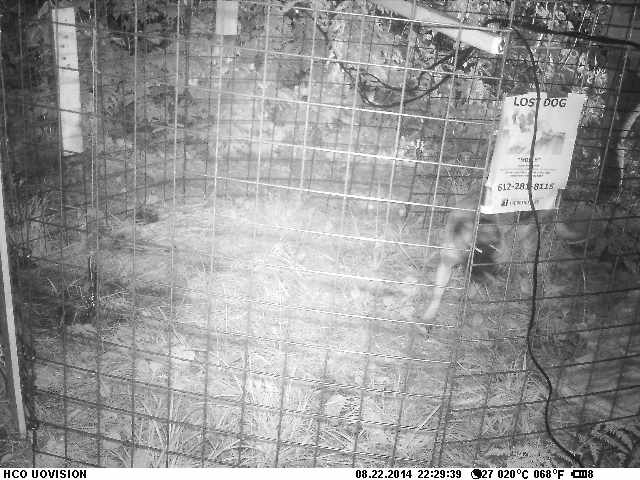 Molly Captured In The Trap 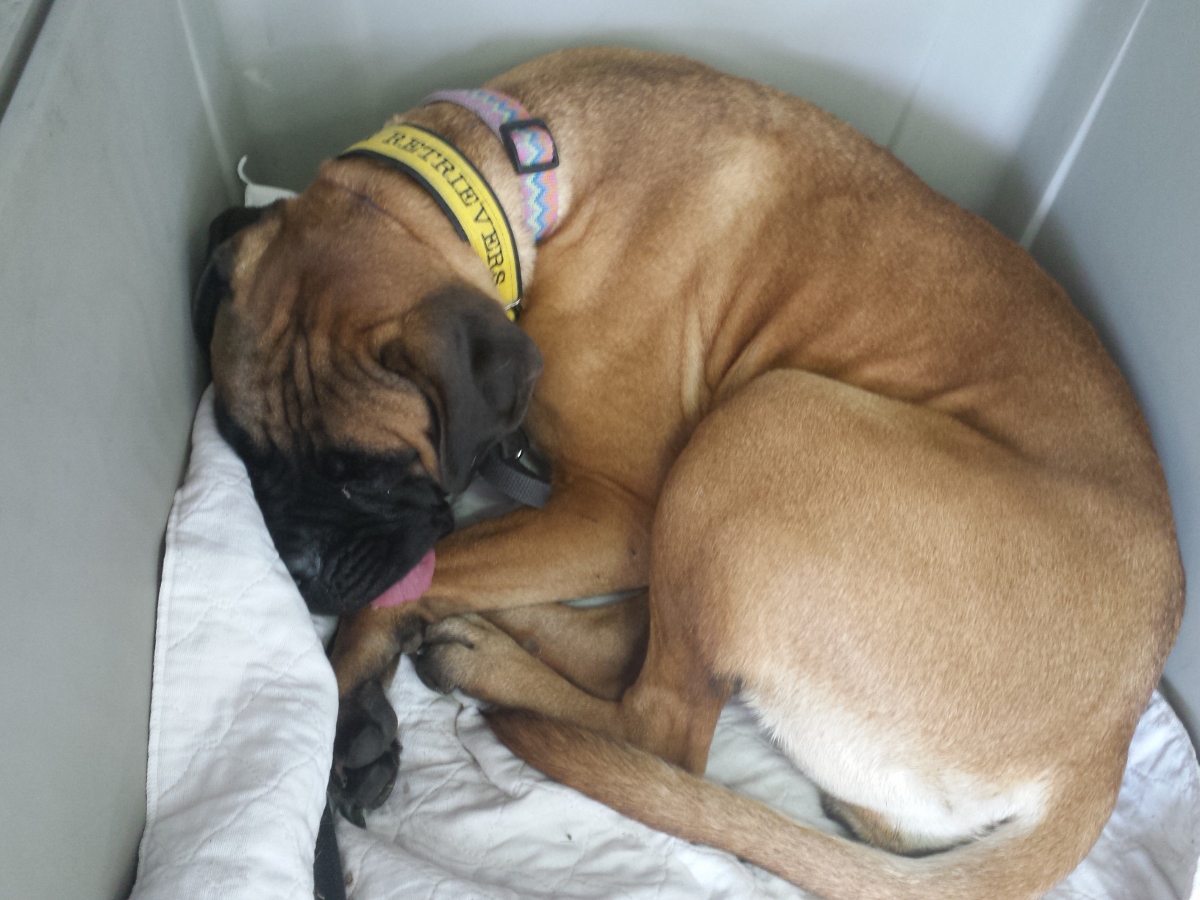 Getting Some Much Needed Rest 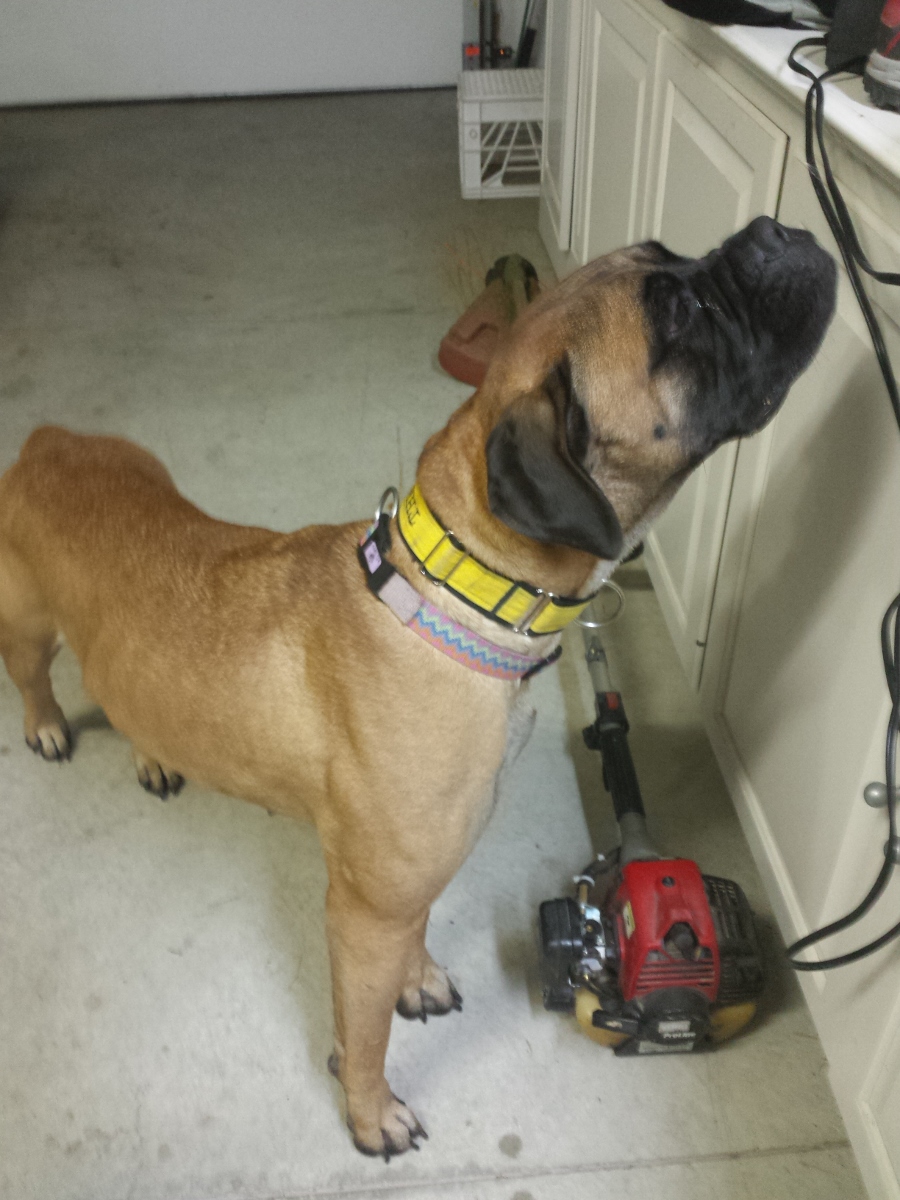 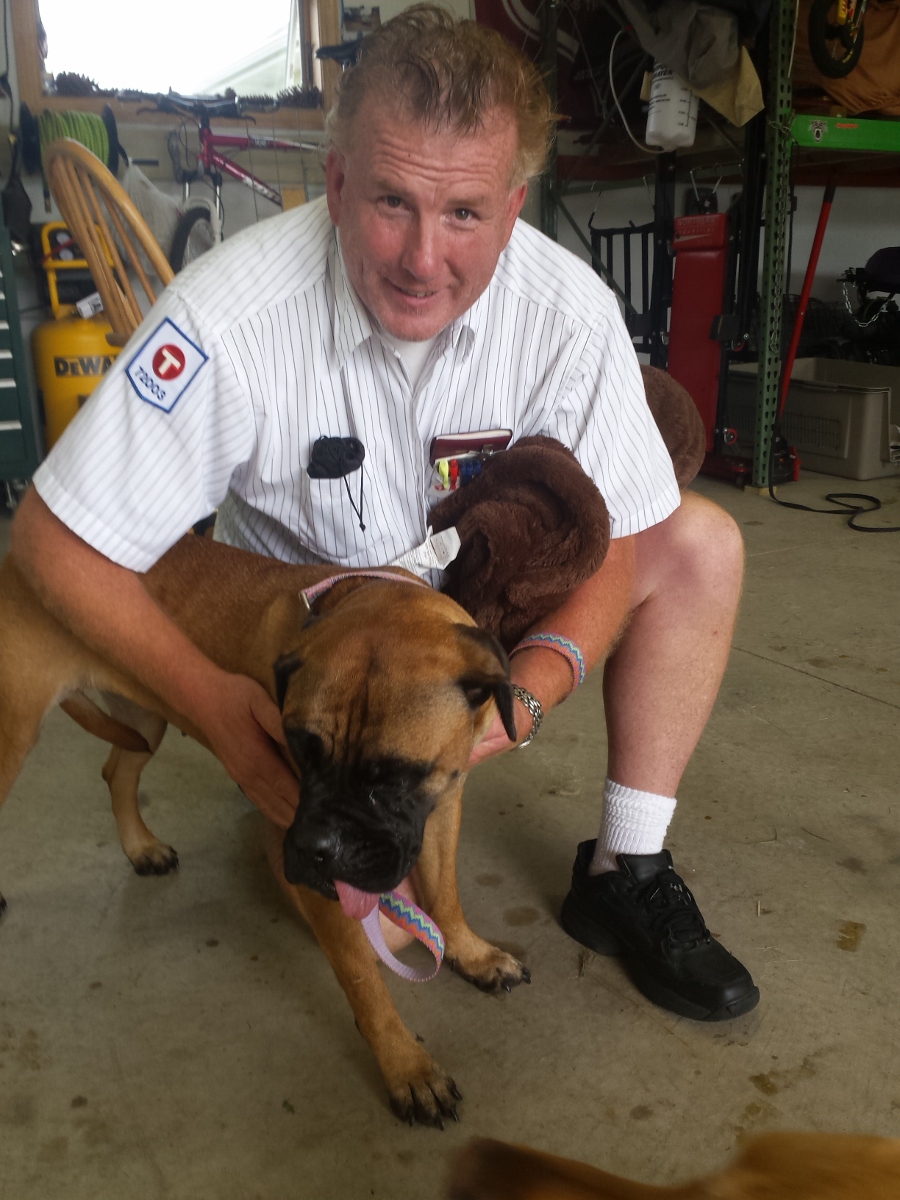