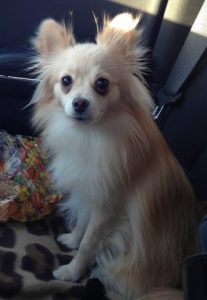 The Retrievers learned of Chloe through her lost dog posting in late Nov 2013.  She escaped her harness while at Petsmart just after being adopted.  There were zero sightings of this Pomeranian and given the coldest winter in Minnesota history, the outlook on hope was slim.

In April of 2014, The Retrievers heard from a Good Samaritan (GS) who had spotted a Pomeranian regularly in her neighborhood and visiting their home for food they were providing it.   There were thoughts this could be Chloe from Nov, but could it really be after all this time? Given how small she was, could she have really survived the coldest winter in Minnesota history on her own?  Only time would tell….
The Retrievers partnered with the GS to provide a wire crate to use as a trap and with their ingenuity they were able to outfit the trap with a rope  that was run to their home, and two live cameras they would monitor from their home.  Then they waited….about 10 days after first sighting the Pomeranian and setting regular feeding stations, there she came and the GS was ready and watching the video feed from their cameras set up near the trap.  They used the cameras to make sure she was all the way into the trap before pulling the gate closed with the rope.  They got her!

After speaking with the owner and wondering of this really could be Chloe, it was determined that this precious little girl was indeed her and she had survived the winter.  Pure resilience. 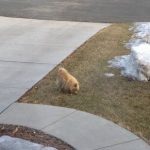 Chloe visiting the front yard of
the GS in April 2014.

Huge kudos to the GS whose goodwill and determination got this brave little girl out of the cold and back to her loving home where she belonged!
The Retrievers like Chloe’s story for a few reasons…. It’s further evidence that there are many people out there with kind hearts that are willing to go the extra mile to help animals in need, and it shows how creative anyone can be in helping safely capture dogs in Chloe’s situation.  Most of all it proves what we often tell people who are missing dogs: They are very resilient and you must give them credit for their survival capabilities…