In March 2014, we learned about a stray Chesapeake Bay Retriever who had shown up in the North Branch, Minnesota, area the previous fall. Fed by several Good Samaritan families, the Chessie had survived on his own in a wooded area through the harsh winter of 2013-2014. 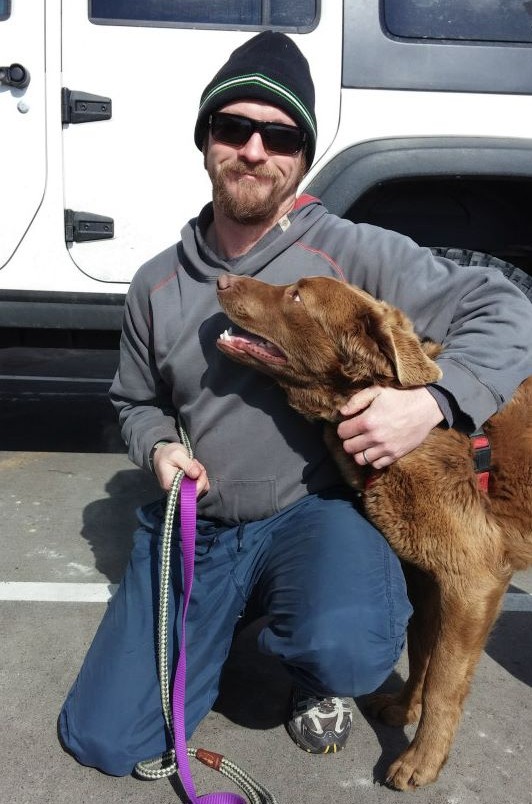 Yukon, who turned out to be
remarkably friendly, receives
some affection from Retriever
founder, Greg James.

This dog was seemingly friendly, but was not willing to let anyone get within 100 feet to try to help him.

An action plan was put in place and the Retrievers team set out the Missy Trap to try to bring this survivor in from the cold.  Because the families had done such a good job of getting the dog into a feeding routine, he was remaining in the general area and returning to the same two locations for food.

We set up the Missy Trap at 4 p.m. on a Saturday afternoon as the Chessie sat and watched from a distance.  Initially, we’d planned to lock the gate open for the night to allow him to get comfortable with the trap. But since he was not scared away by our commotion, we decided to try to catch him that same day.

For four hours, we observed him from inside a parked vehicle as he walked hesitantly around the trap, too skittish to enter. But eventually, the aroma of the tasty bait and treats inside overpowered his fear. Once he was far enough into the trap, we triggered the gate to close, and we had him.

We named him Winter. He is as kind a dog you could ever meet, and he seemed to be relieved when we caught him. He spent his first night with one of the Retriever team members, and the following morning was transported to the Chesapeake Retriever Rescue of Wisconsin.  He is doing very well in foster care and they have renamed him Yukon.